Back in September, our Creative Team received a request from Paul Grantham, Asst. VP of Communication Services, to produce a virtual version of the annual Veterans Day ceremony, which was exciting and anxiety-inducing at the same time because we’ve never done anything like this before.

We have produced components of events – history of Founder’s Day video, short videos for Marking the Moment, and even the New Student Convocation ceremony, which was mainly speeches.

But this was a production from start to finish of an event with multiple moving parts: ROTC color guard, speeches from administration, highlights from Duke staff and faculty talking about what it means to be a veteran, cadets and staff paying tribute at the Memorial Wall outside the Chapel, the National Anthem, and a bagpiper.

To coordinate all of these efforts, components were assigned to individual team members and we used Monday.com to post updates about in-the-weeds details and progress for each segment with real-time feedback. My colleague Megan Mendenhall created a storyboard detailing the elements for each production. 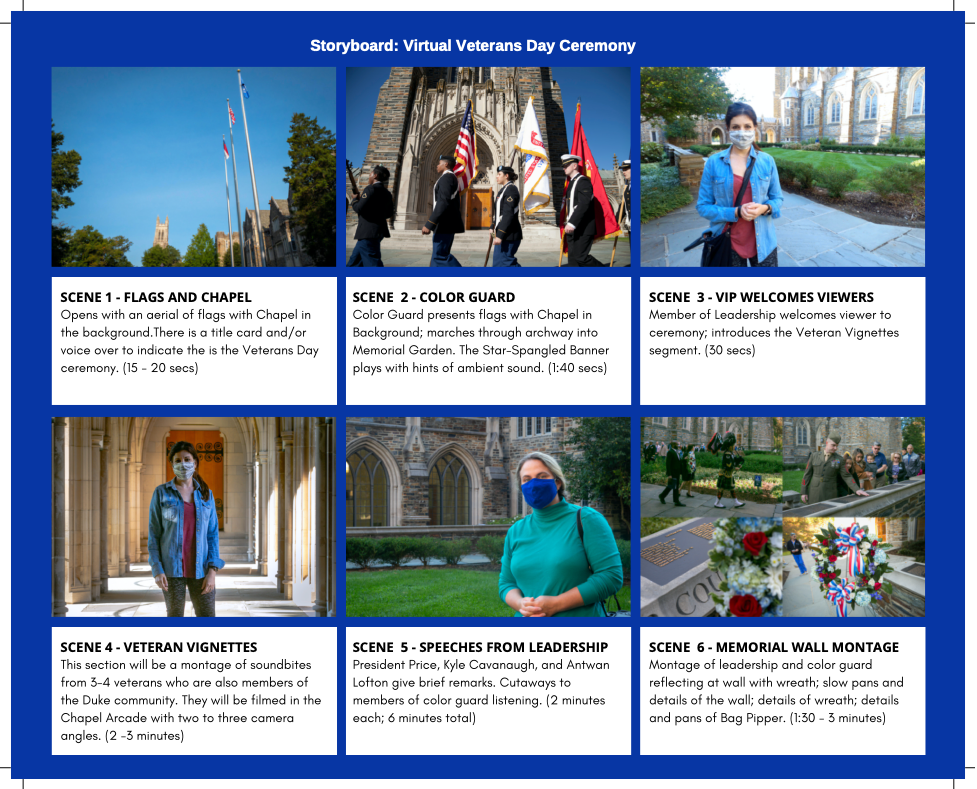 Megan also took on the intro for the video, diving into the Library archives for historical photos illustrating Duke’s long history of engagement with the Armed Forces. Megan was also in charge of all of the filming at the Memorial Wall. Our video manager, Julie Schoonmaker, spearheaded the efforts to film all of the speeches from Duke leaders and was responsible for editing the entire production. I led the Color Guard efforts. But each of these components was a team effort, many of them involving four members of our team.

My component was the Color Guard. I started thinking about what would be the ideal time of day to film this. Usually, the Veterans Day ceremony is at 11am, but by then the sun is high, creating flat, unattractive light with harsh shadows in the eyes. Since we had flexibility to film the cadets separately from the administration, I wanted to film the Color Guard at sunrise when the light is prettiest and most dramatic. We did some test shots beginning before sunrise until the sun was high enough in the sky that the shadows on the Chapel doors became problematic, and pinpointed a start and end time for the filming. We only wanted to ask for one hour of the students’ time. I then created a shot list with four different camera angles, including a a GoPro for on-the-go, documentary style footage, and a drone for flyovers. Our digital assets manager Bill Snead has a commercial pilots license and this been creating amazing aerial views of campus for the past two years.

During this time, we were still waiting on one of the two OIT drones checked out to students to come back from loan so we could use it, as our office didn’t own a drone. But those drones had not been returned since the pandemic began after Spring Break and we had no idea if or when they would be available. We had been hoping to purchase our own drone for more than a year, so our director, Blyth Morrell, used this opportunity to put in a special $2499 purchase request for a drone and fortunately it was approved, after showing the multiple photography and videography uses in everything from #dukeuniversity to presidential messaging videos to Duke’s annual financial report. 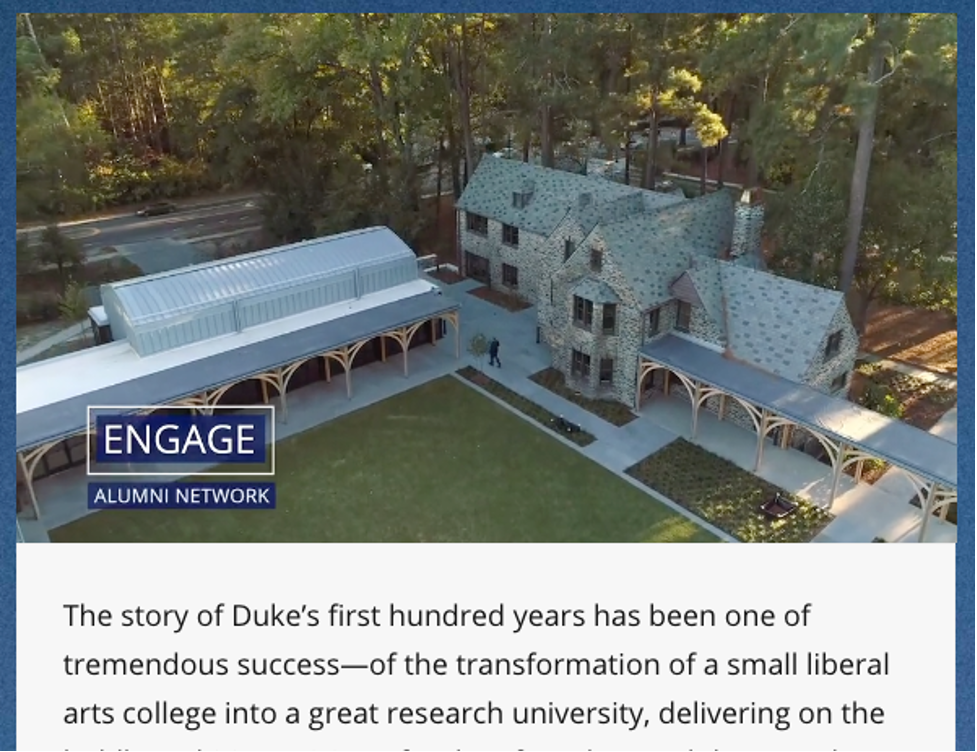 Julie reached out to numerous Duke staff and faculty who are veterans to see if they would be interested in participating in the ceremony, and if so, film themselves speaking with a smartphone. She also lined up the dates to film the various administration’s speeches, including President Vincent Price; Kyle Cavanaugh, VP of administration; Antwan Lofton, asst. VP of human resources; and Paul Crews, director of the Durham VA., as well as a morning to film James Chambers, the bagpiper.

We tried to film everything on as few dates as possible to streamline the production and also to strive for consistency with light. But we ended up having to film over multiple mornings due to various schedules, with both full sun and cloud cover.

We soon realized with our shooting schedule, spread out over a few weeks, that a traditional wreath with fresh flowers wouldn’t work so Bill volunteered to make one with plastic flowers from Walmart. Though smaller than the typical wreath, the end result was beautiful and subbed in nicely. 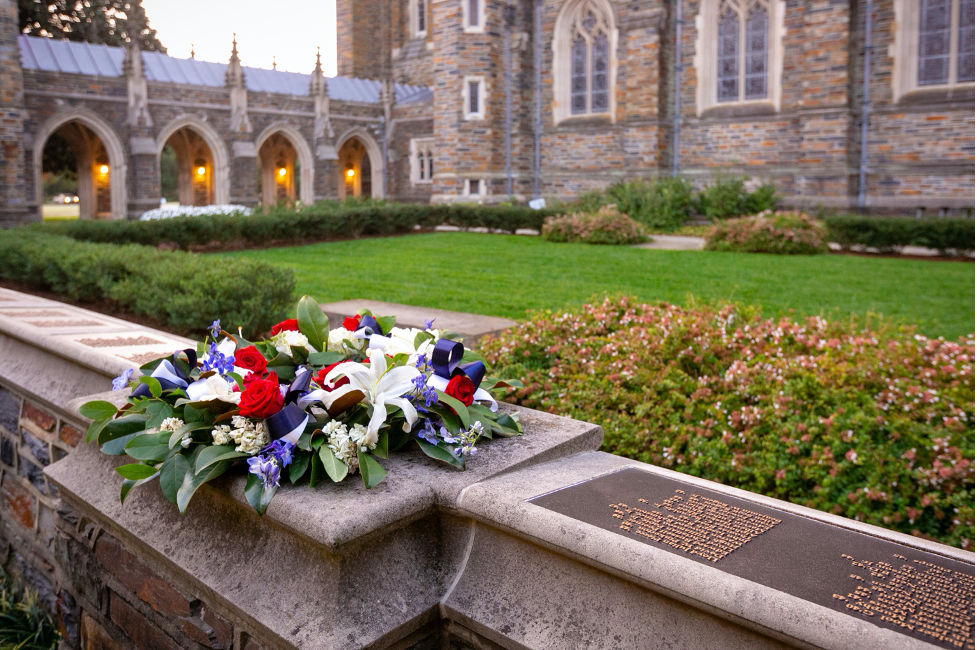 We had to reschedule our filming of the Color Guard multiple times due to overcast and rainy weather, as I was holding out hope for that sunny morning I envisioned. The nearly two-week delay in shooting was a plus and minus for us. Our new drone arrived the day before, so that was a huge bonus. Otherwise the drone footage would have been of just the Chapel without the cadets. But we ended up having to shoot without our key video team member Julie, out on vacation, so I divided up her shots and asked Blyth to operate the GoPro and help keep us on schedule. 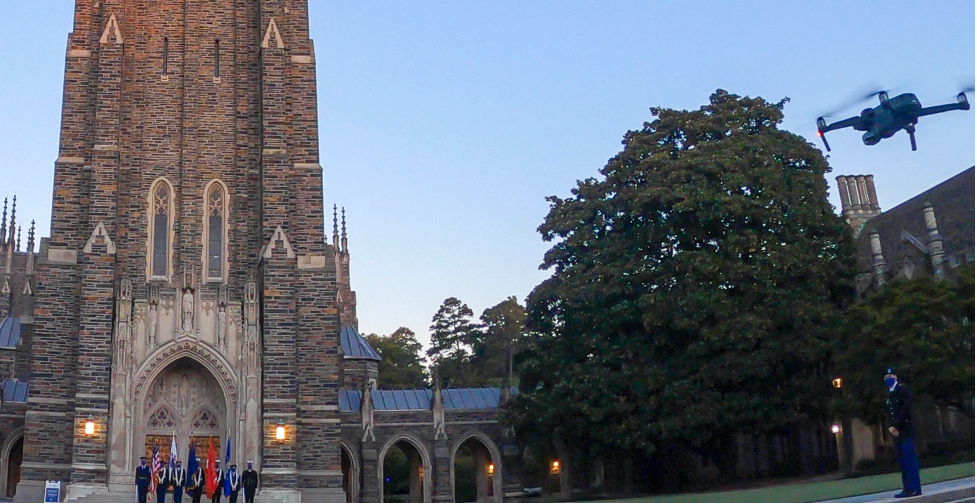 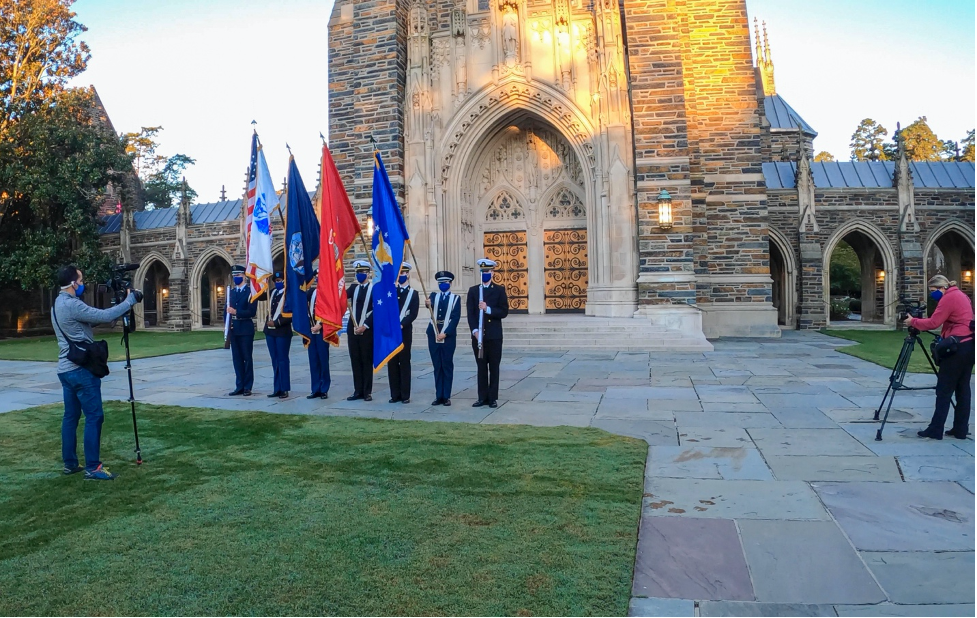 After filming the Color Guard, we then transitioned to the Memorial Wall, where Megan and Julie had scouted and strategized about different camera angles and shots of the cadets paying tribute to fallen soldiers.

We learned that a director to oversee each shot and camera angle was key. Another lesson: it was virtually impossible to film any aerials while any other filming was going on because our crew and gear were in the shots.

Once I saw the awe-inspiring drone flyover of the cadets up to the top of the Chapel spires, I realized I needed to find equally inspiring National Anthem music to match. After sending out a handful of emails, including an alum who I photographed with Hoof ‘n’ Horn, I was connected with junior Logan Welborn, also with Hoof ‘n’ Horn, Out of the Blue, and a recording artist in her own right with Small Town Records. About a week later Logan sent a beautiful rendition of The Star-Spangled Banner, recorded on her iPhone. 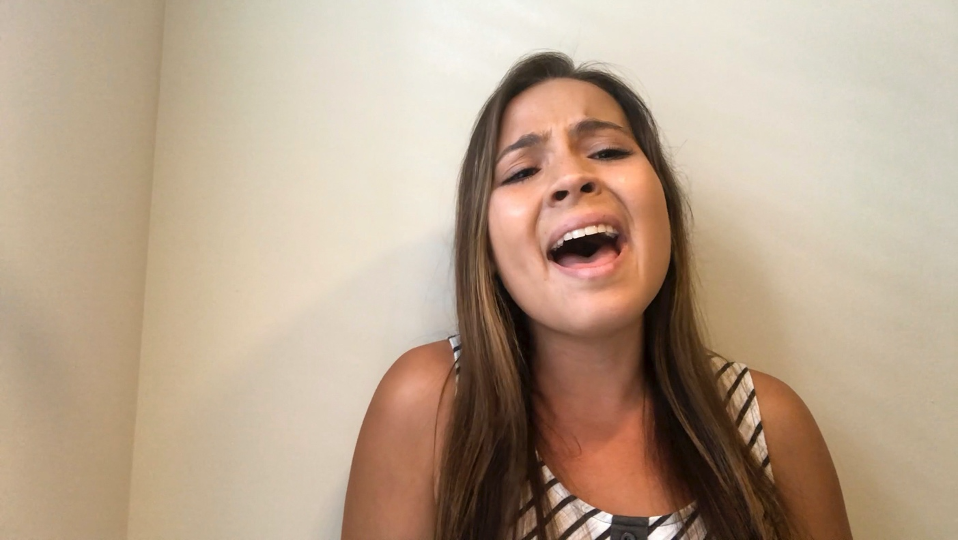 Julie was able to line up James the bagpiper immediately after our session with President Price, so this was another busy morning. Since we took the opportunity with Pres. Price to film multiple different messages, we set up two locations with lighting before his arrival. Since one of the locations was in the Chapel archway, Bill and I stood on either side holding signs asking pedestrians to stay quiet while passing through, while Julie and Megan filmed Pres. Price. 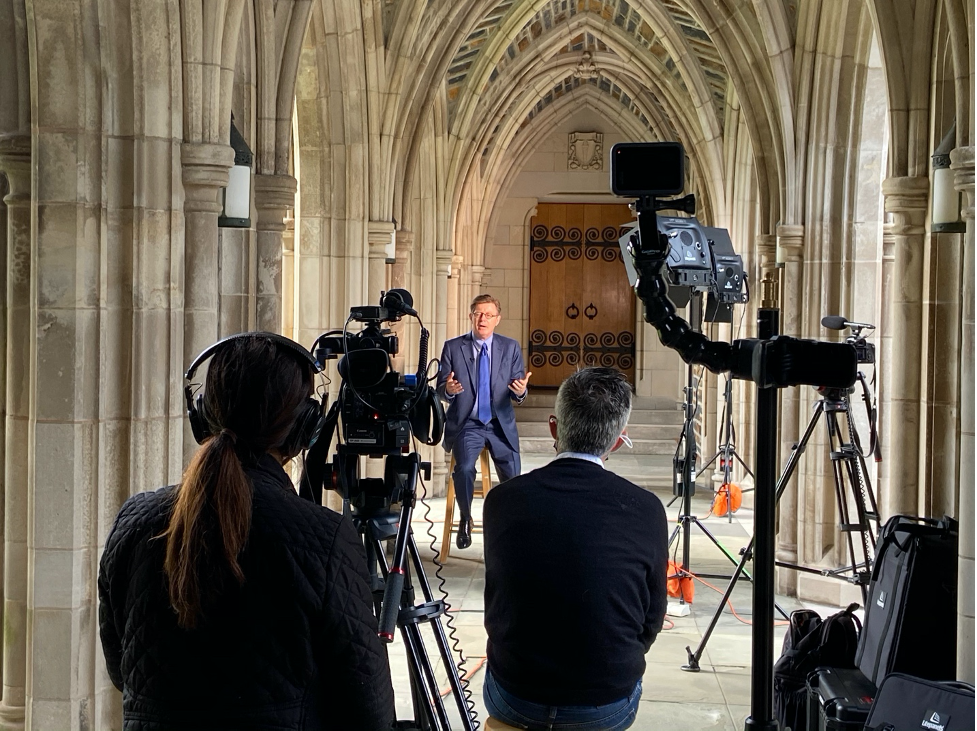 We then spent a fun hour with James filming him in the varied positions Megan and Julie had worked out, and ended the shoot with him walking under the canopied woods behind the Chapel as Bill filmed from above with the drone. 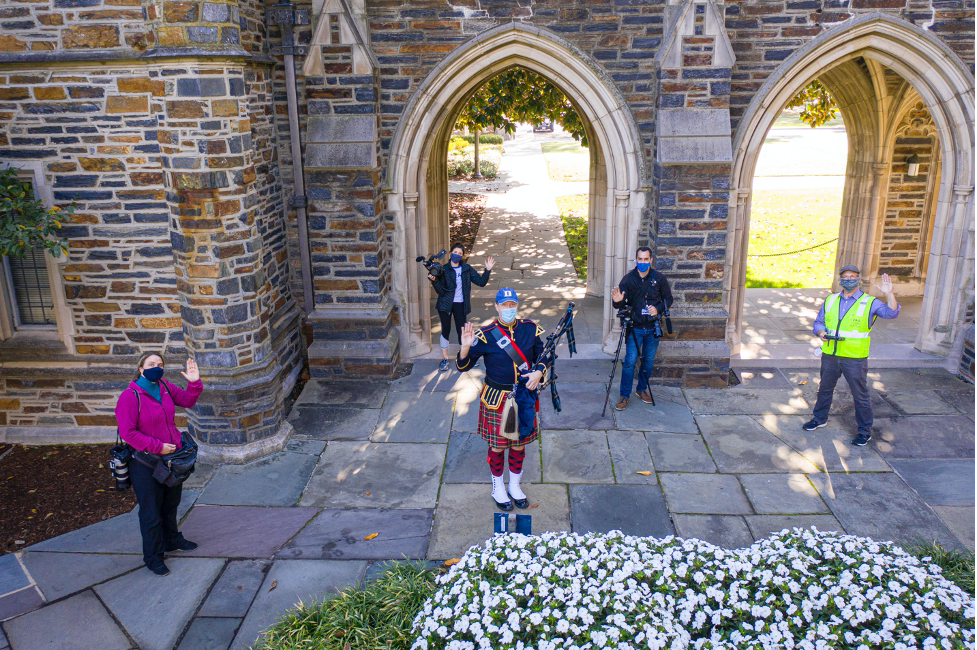 All told, team members posted 57 virtual Veterans Day ceremony updates in Monday.com from the initial request on Sept. 11 to project completion on Nov. 10. We set Fri. Nov. 6 as the date for completion and review by Paul, Pres. Price, and Mike Schoenfeld, VP for Public Affairs and Government Relations, and the video was approved on Mon. Nov. 9. But in sharing the video with Army ROTC, I discovered I needed to make a minor change to the sequencing of the color guard, so we ended up finishing it a day before the ceremony.

Now with the added title of video and event producers – I say this half-joking – our team is poised for more challenges and adventure in the year ahead.

Behind the scenes: Class of 2024 Welcome Mural