UPDATE: On February 26, 2022, the Digital and Brand Strategy team was awarded a regional Emmy for “Merry & Bright”. Read more

Wrapping a 25-foot-tall tree in lights

Stringing holiday lights around a 25-foot-tall tree is no easy task, and not having access to a lift made the job more challenging. We used ladders, and a modified pole saw to string the lights half-way up the tree, but we couldn’t reach the top half of the tree, even with a 16-foot ladder. We experimented with many ideas, including using a slingshot and a frisbee to launch the lights into the tree’s upper part, but none of those worked.

Bill Snead, our photographer and digital assets manager, came up with the idea of using a pully system to string the lights into the upper part of the tree. First, he taped twine to a baseball, and then he threw the ball over the tree. Next, he tied a strand of lights to one end of the twine and then pulled the other end of the twine, dragging the strand of lights into the top of the tree.
The only challenge with the pulley idea was throwing the baseball high enough to clear a 25-foot-tall tree. Thankfully, Ashley Wolf, our Social media Coordinator and former division one softball player, is on our team. She cleared the tree on her second try.

Adding an extra touch of “Duke”

Even with the blue string lights and the gothic architecture of the west campus, our message was missing a signature DUKE element. Fortunately, our director, Blyth Morrell, remembered that Alumni Affairs has a set of four-foot-tall cardboard letters that spell out “DUKE.” After a few (several) emails, she tracked them down, and we transported the cardboard letters from the Karsh Center to West Campus. They added the perfect touch of “Duke” to the festive scene.

A thousand luminarias of light

Teamwork makes the dream work, which was the case for creating, placing, and lighting 1,000 luminarias. Making the luminarias were straightforward. One group folded the bags; another group added sand and candles to the bags, while a third group began placing the completed bags on the quad.
Timing the lighting of the luminarias was tricky. We wanted to capture the twilight, so all of them had to be lit by 4:45 pm. But, lighting them too early would cause them to burn out before we got our nighttime shots. To make the timing work, we had six people with grill lighters simultaneously lighting luminarias. We finished lighting them just as dusk arrived.

This year’s holiday message was one of the most ambitious projects of 2020. It was a multi-day effort involving over a dozen people, hours of planning, creative problem-solving, and teamwork. However, the result speaks for itself; the glowing luminarias and blue lights transformed the quad into a magical wonderland. 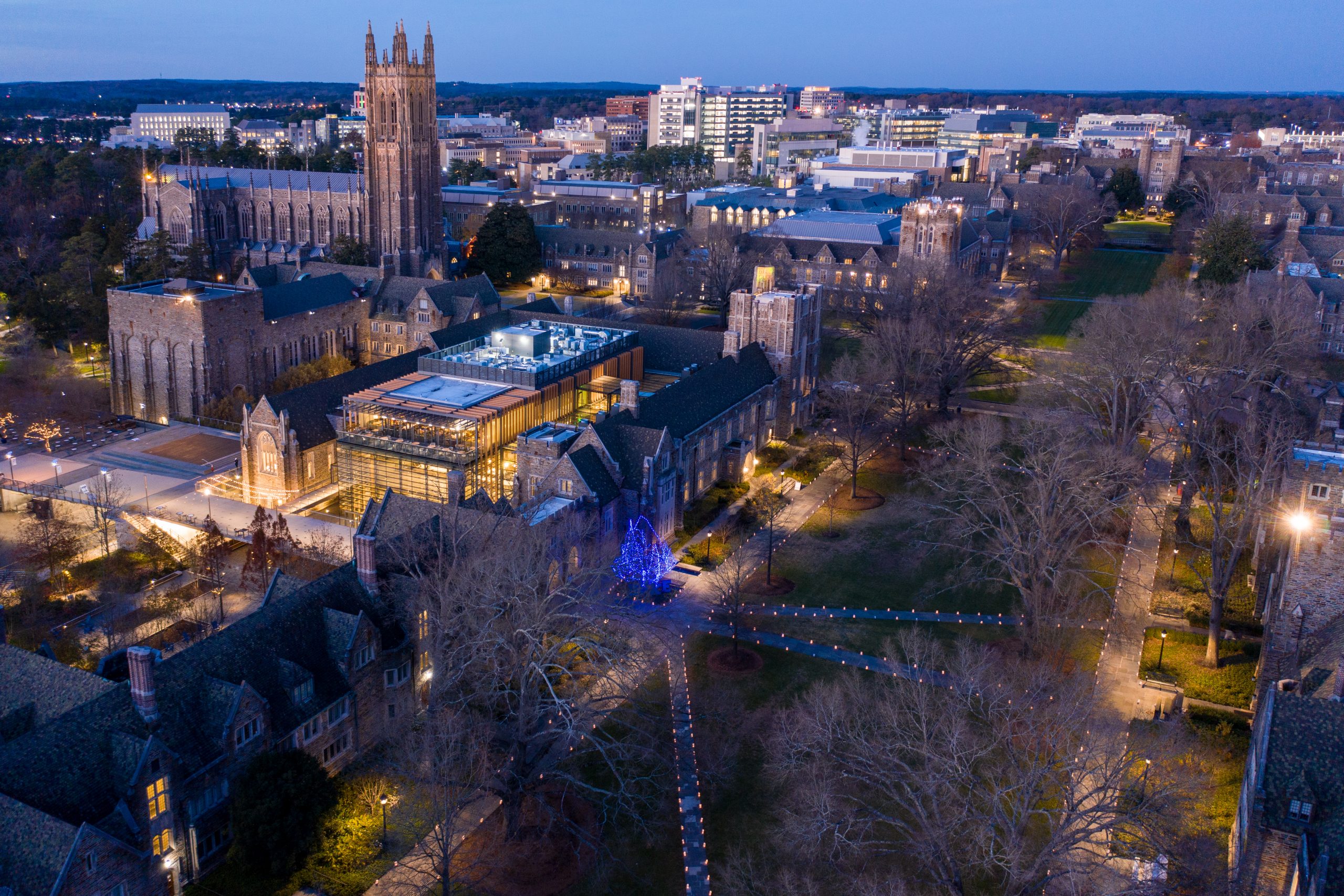 The University Communications team decorated a tree near the Brodhead Center with blue string lights and lined the residential quads’ walkways with luminarias for a holiday video. 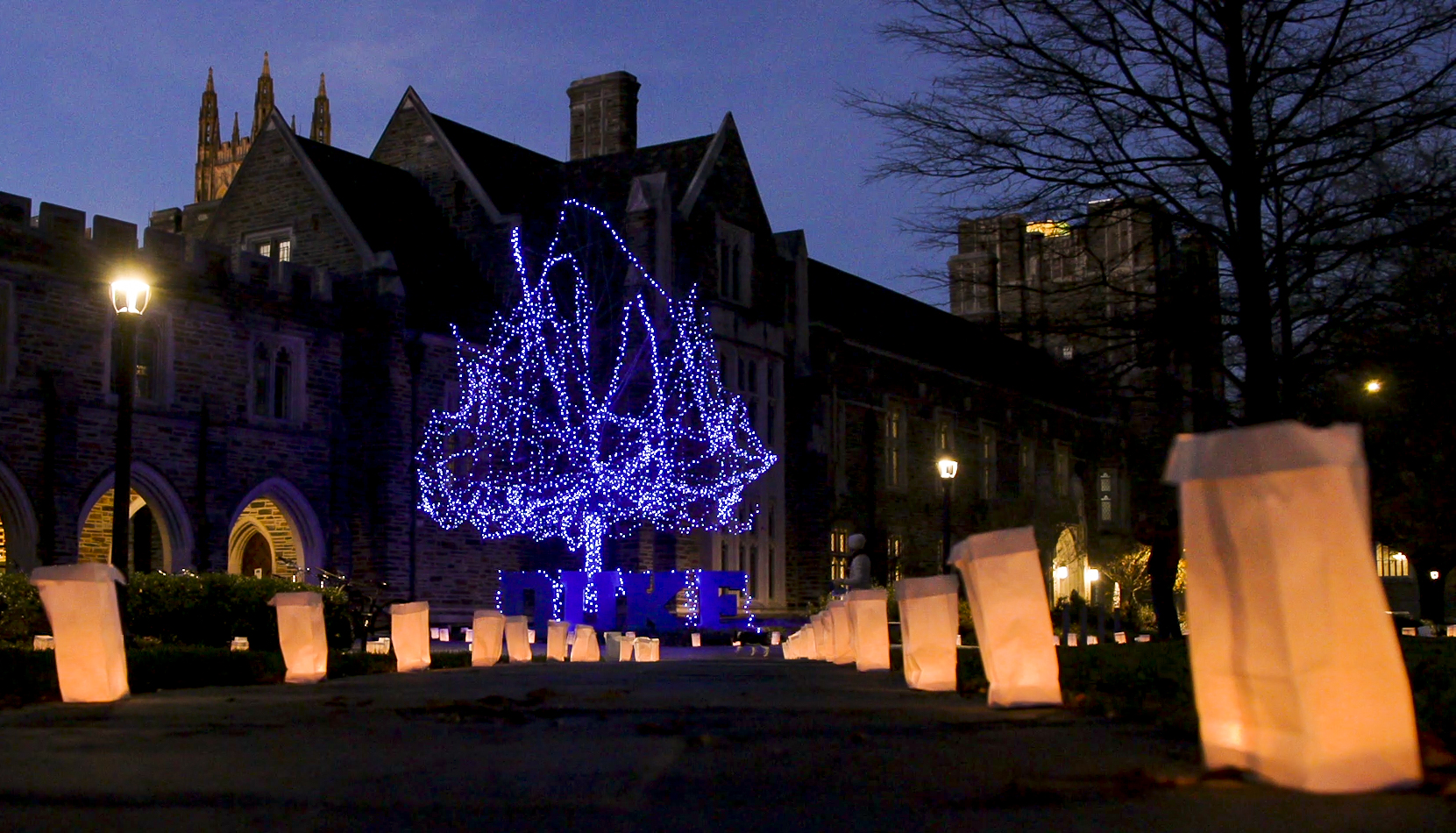 Luminarias line the walkway leading to a tree wrapped in blue string lights. The holiday decorations were temporarily on display to film a holiday video message of peace and joy. 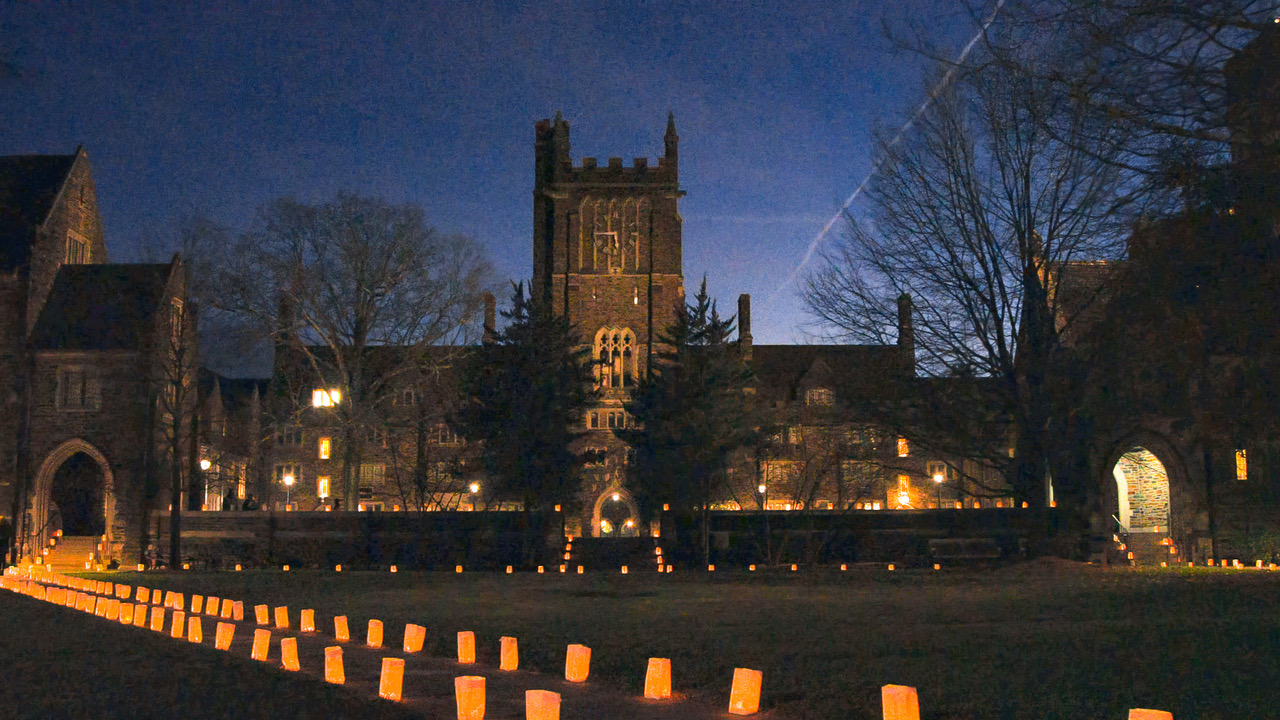 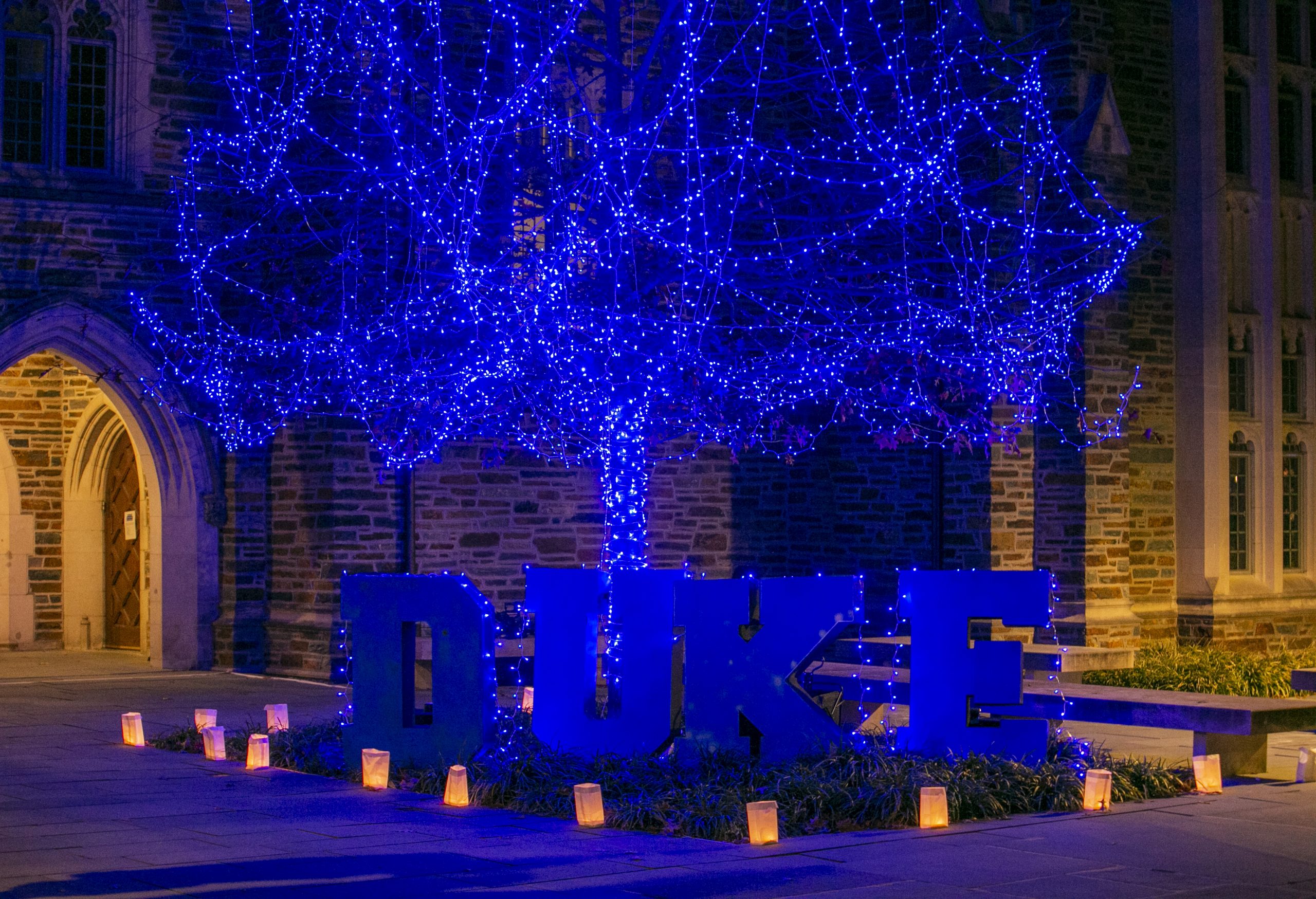 The University Communications team wrapped cardboard letters in blue string lights and placed them at the bottom of a decorated tree for a holiday video. 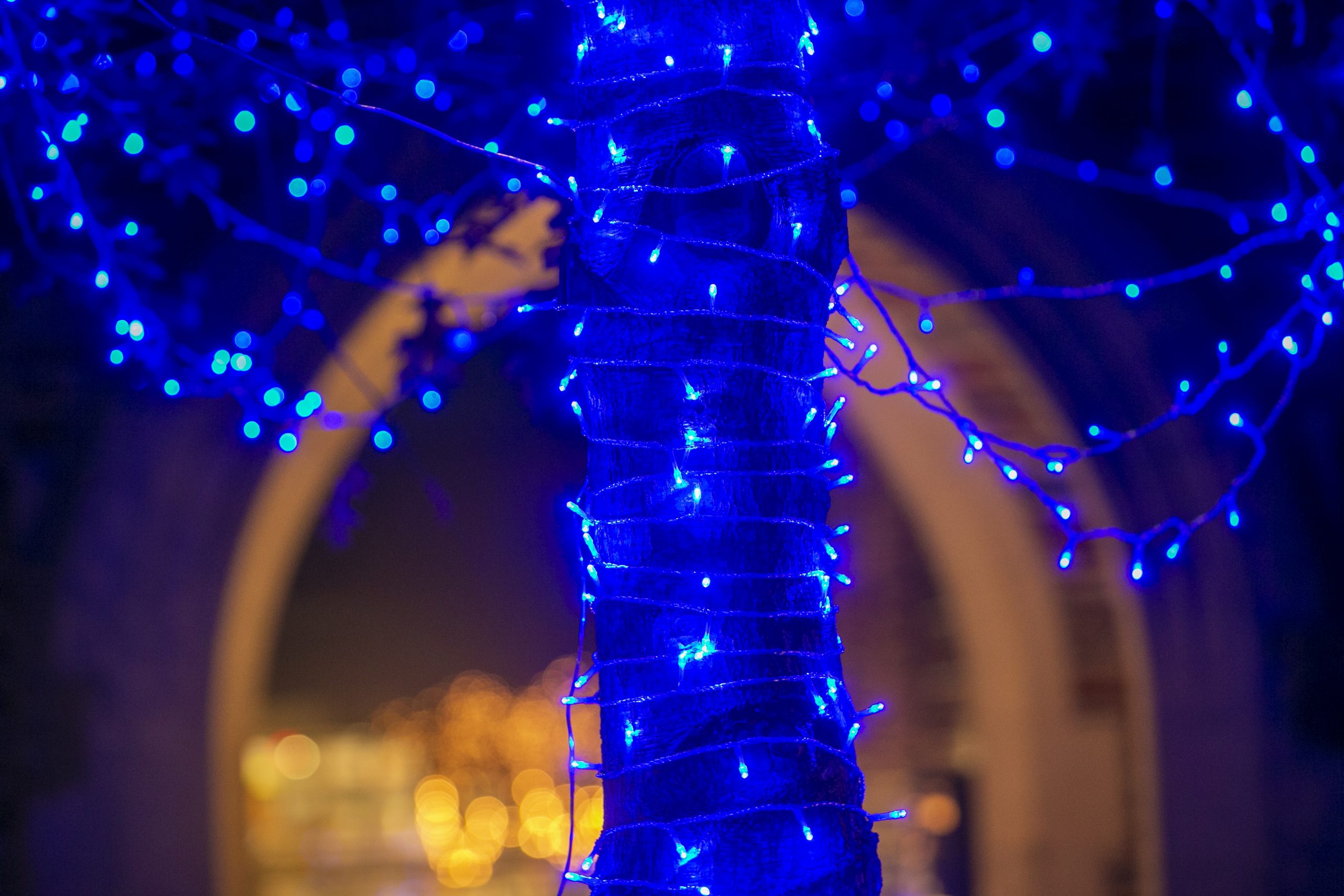 The University Communications team decorated a tree outside of the Brodhead Center with blue string lights for a holiday video.