When my colleague Julie Schoonmaker, assistant director of multimedia and production, asked me how I felt about livestreaming the Duke Puppy Kindergarten Fall 2021 class photo shoot I wasn’t sure how many people would be interested in watching me try to take a picture of several puppies. Wow, was I happily wrong! 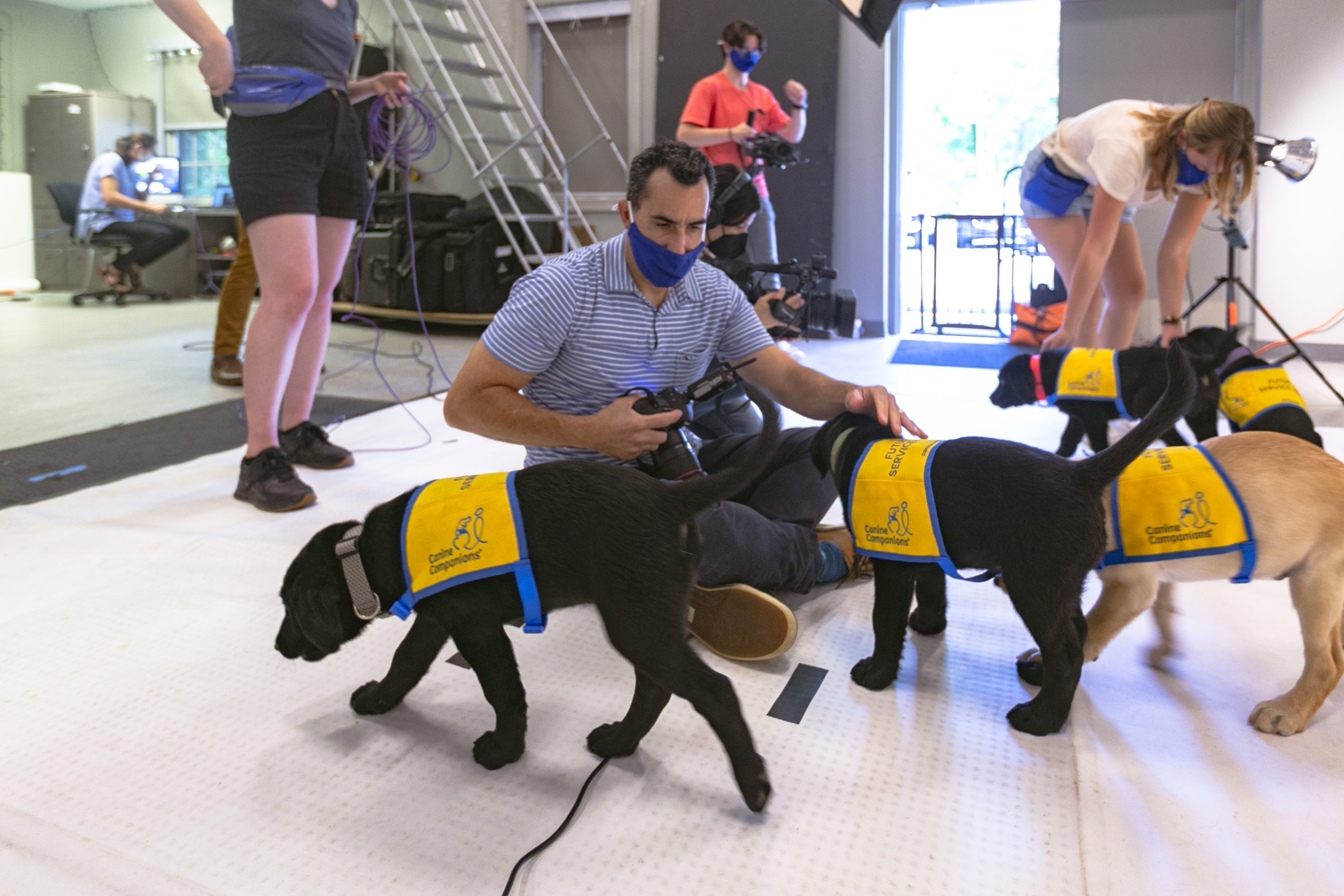 I pet the puppies throughout the shoot to try to get them to be more comfortable around me, and also, who doesn’t love petting puppies!

First of all, I knew my colleague Greg Phillips, director of Glocal Communications, was funny – I had watched several of his YouTube videos, “Rants from a Chaise Longue,” and knew he did open mic improv comedy, but I guess I didn’t know how funny Greg was. Naturally, we chose Greg to host the livestream event, which by the way, we had never done before. Yes, as if wrangling five nine-week old puppies wasn’t chaotic enough we decided to add more chaos into the mix and try out our team’s first time livestreaming an event during the photo shoot! Julie and my colleagues, Emily Frachtling, digital media producer, and Ashley Wolf, social media manager, who is now working in Athletics, got to work putting together and testing the equipment to pull this off. 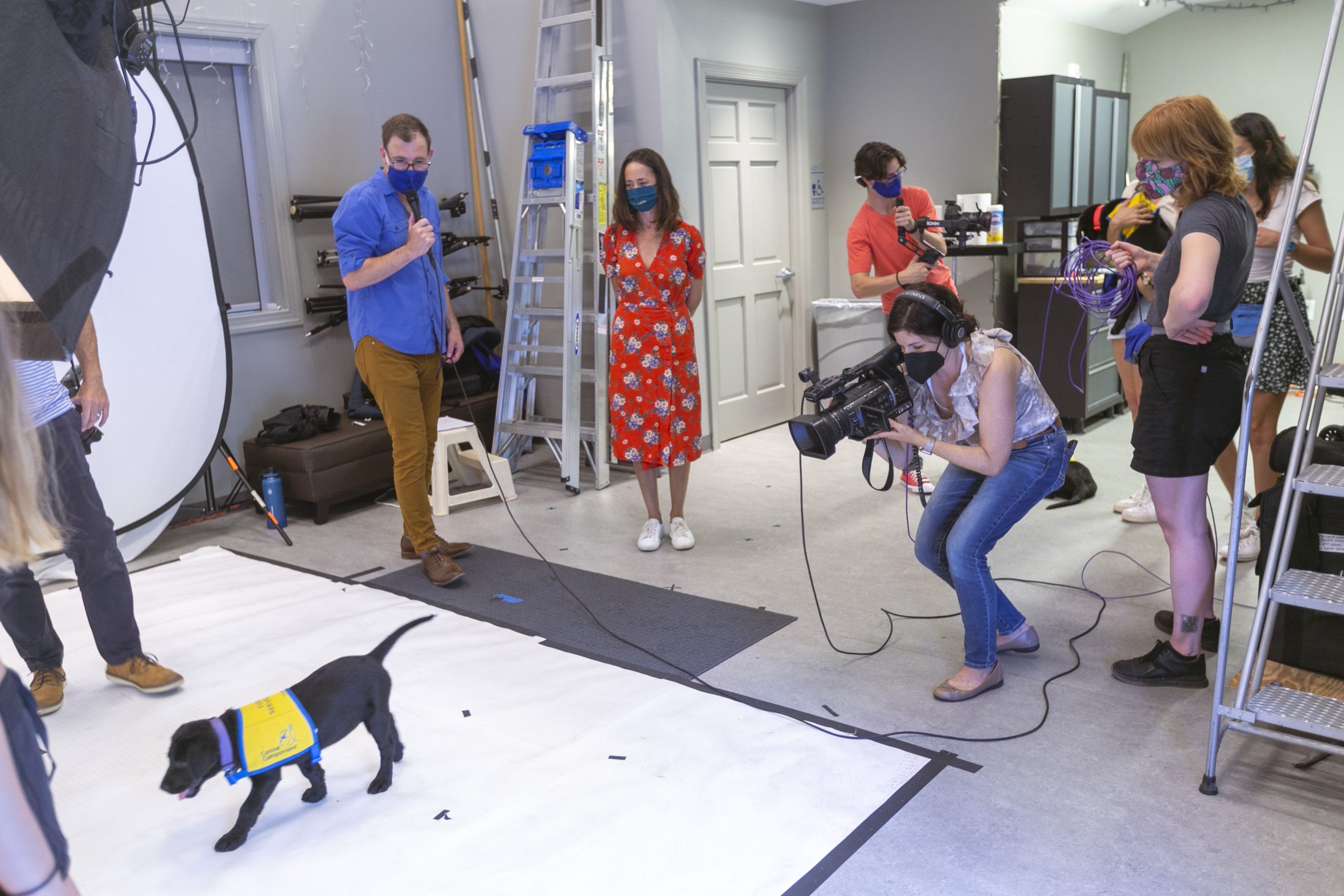 I scheduled the shoot with Vanessa Woods, Duke Puppy Kindergarten director, for Sept. 6, the day the rest of the puppies arrived at Duke, and then we decided that would be too much for them so we moved it to the 7th. And then Vanessa emailed me to say one of the puppies got sick so had to be quarantined from the other puppies for a week. So the shoot was scheduled for the 15th and then Greg got a summons for jury duty that week. Pushing the shoot past that week wasn’t appealing for various reasons, so we decided that if he got called for jury duty we would just do the shoot without a host and film things as they unfolded without commentary. Greg reasoned that people were there to watch the puppies not him. And they may have come for that reason, not realizing, like me, just how entertaining Greg is. 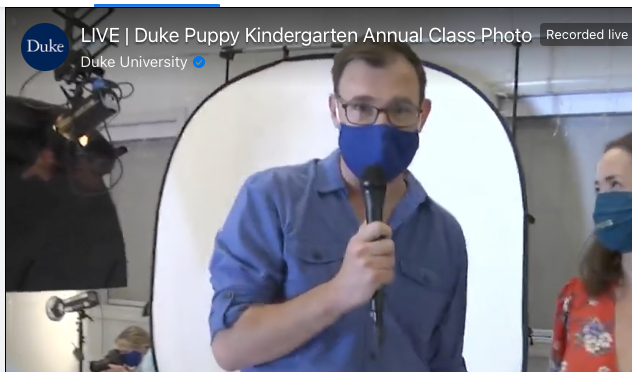 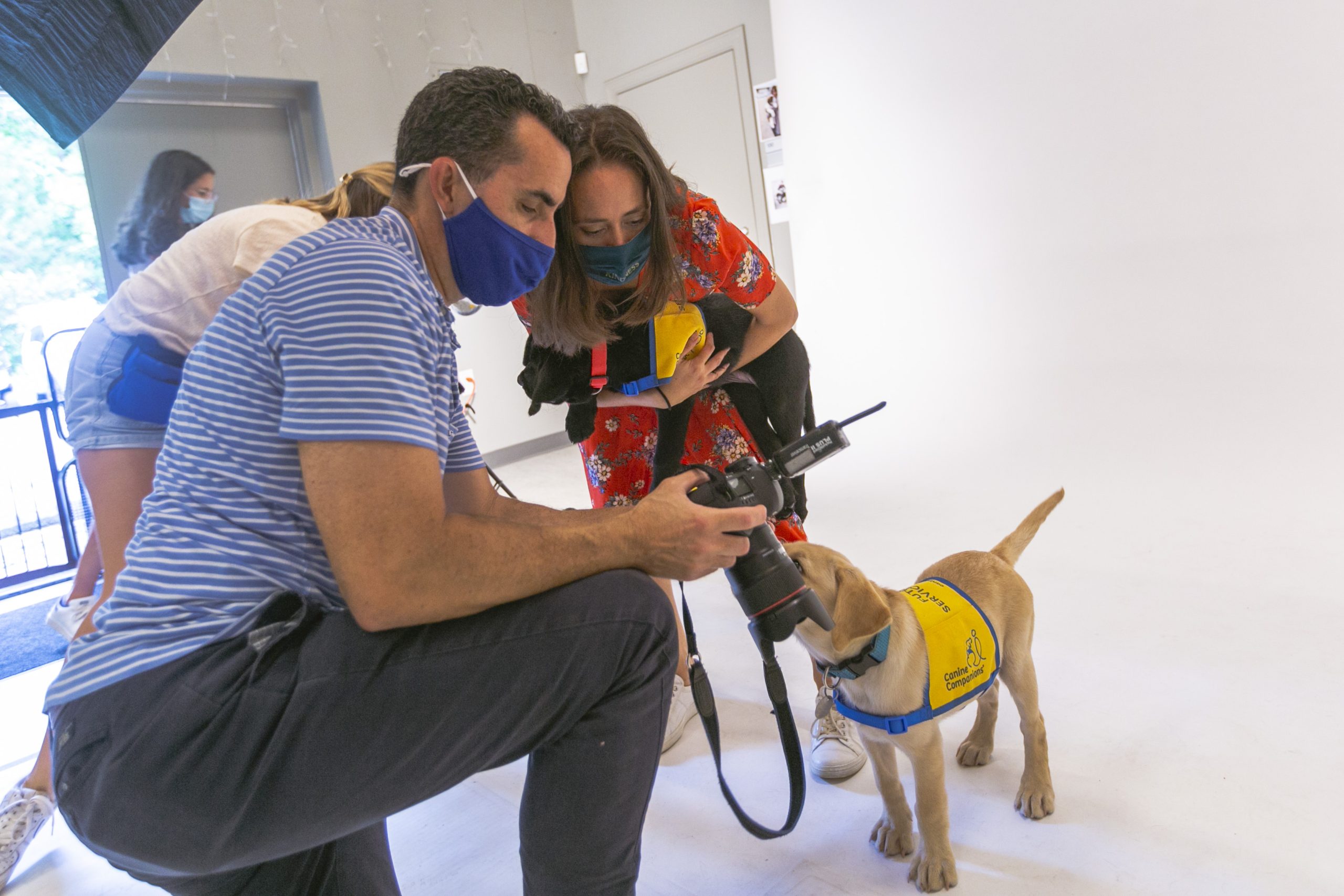 Vanessa and I review some of the group photos on the back of my camera during the shoot.

So thankfully Greg wasn’t called because the livestream would not have been the same without him. I can’t really do justice how quick-witted, funny and talented Greg is in words, but here’s a sample of his brilliance: “This is where I think the treats can be a double-edged sword because the treats get him in place but you see the reason Dunn got up out of his seat and raced to his handler was for the expectation of more treats. And who can blame him, because I’ll be the first to admit when there’s a box of cookies I’m never going to have just one cookie. I’m always looking for that next cookie, and that’s exactly what Dunn’s doing. So you really can’t be upset with him.” And somehow his matter-of-fact British accent makes this even funnier.

The other thing we got lucky about was how the shoot unfolded – there was a natural story arc. We tried for several minutes to get a good shot of the puppies together. I thought I had managed to capture a good, serviceable shot of them together before Gloria or Fearless or more likely Dunn fleeted. But I was really hoping for a great shot, a photograph that didn’t just serve to show what each puppy looked like. I wanted a moment within that image, and ideally a picture that captured some of their personalities.

So we took a break to strategize and decided that we would move ahead with the individual portraits, and then, revisit the group photo when they were all a little more worn out and might sit still a little longer. 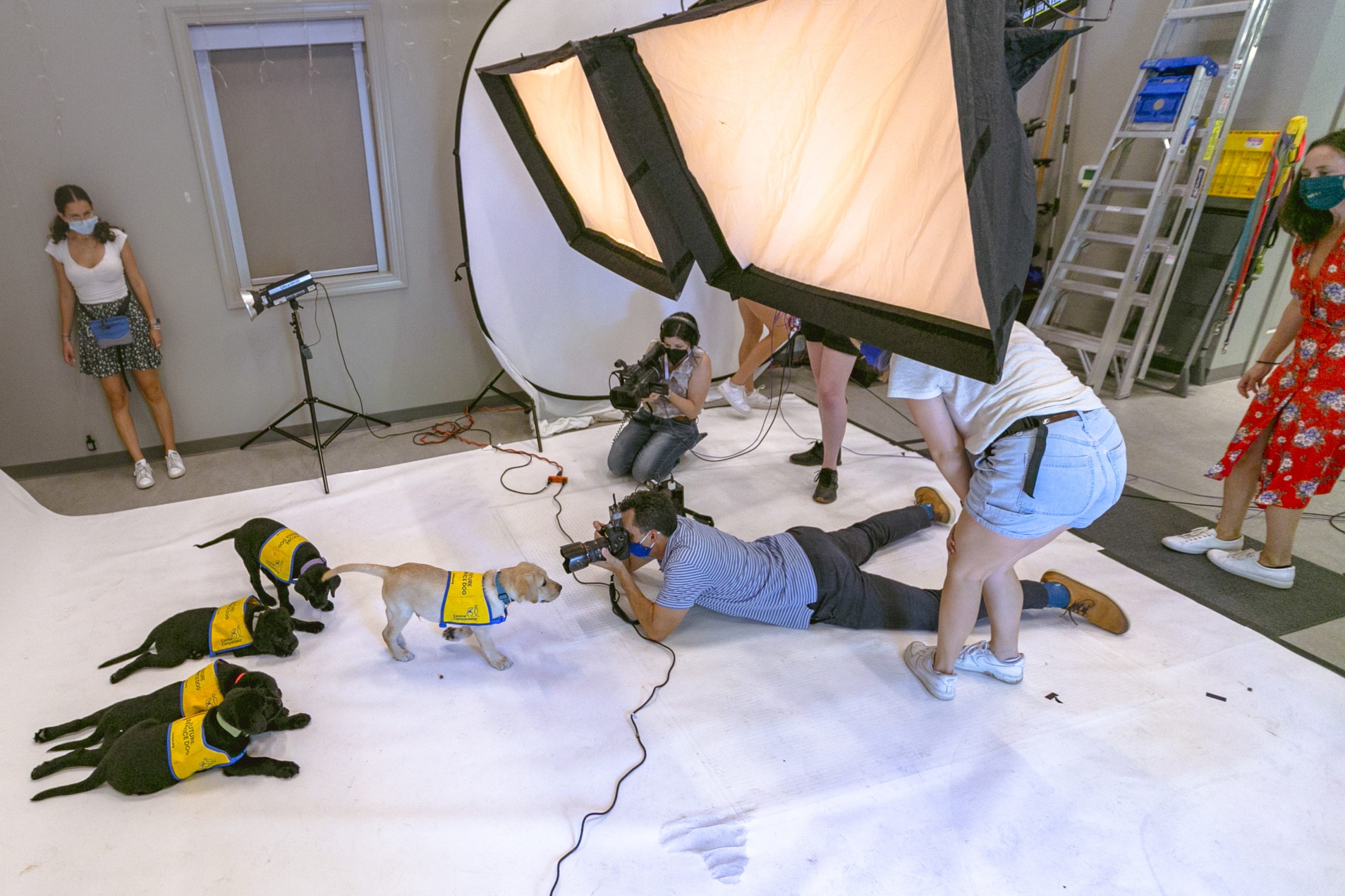 The class photo comes together, just before Dunn leaves his post, as usual. 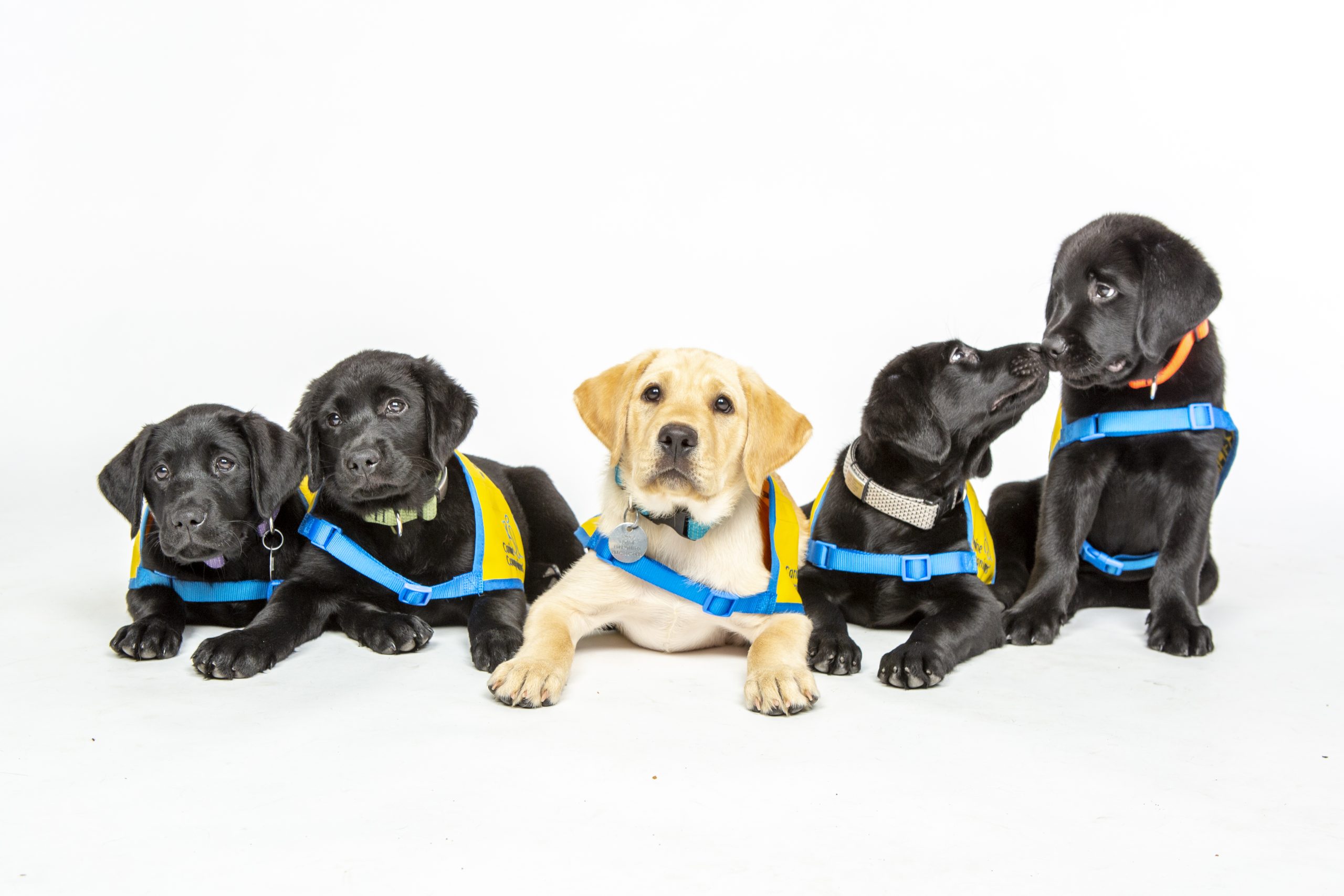 It was clear within those seven seconds we had THE shot. 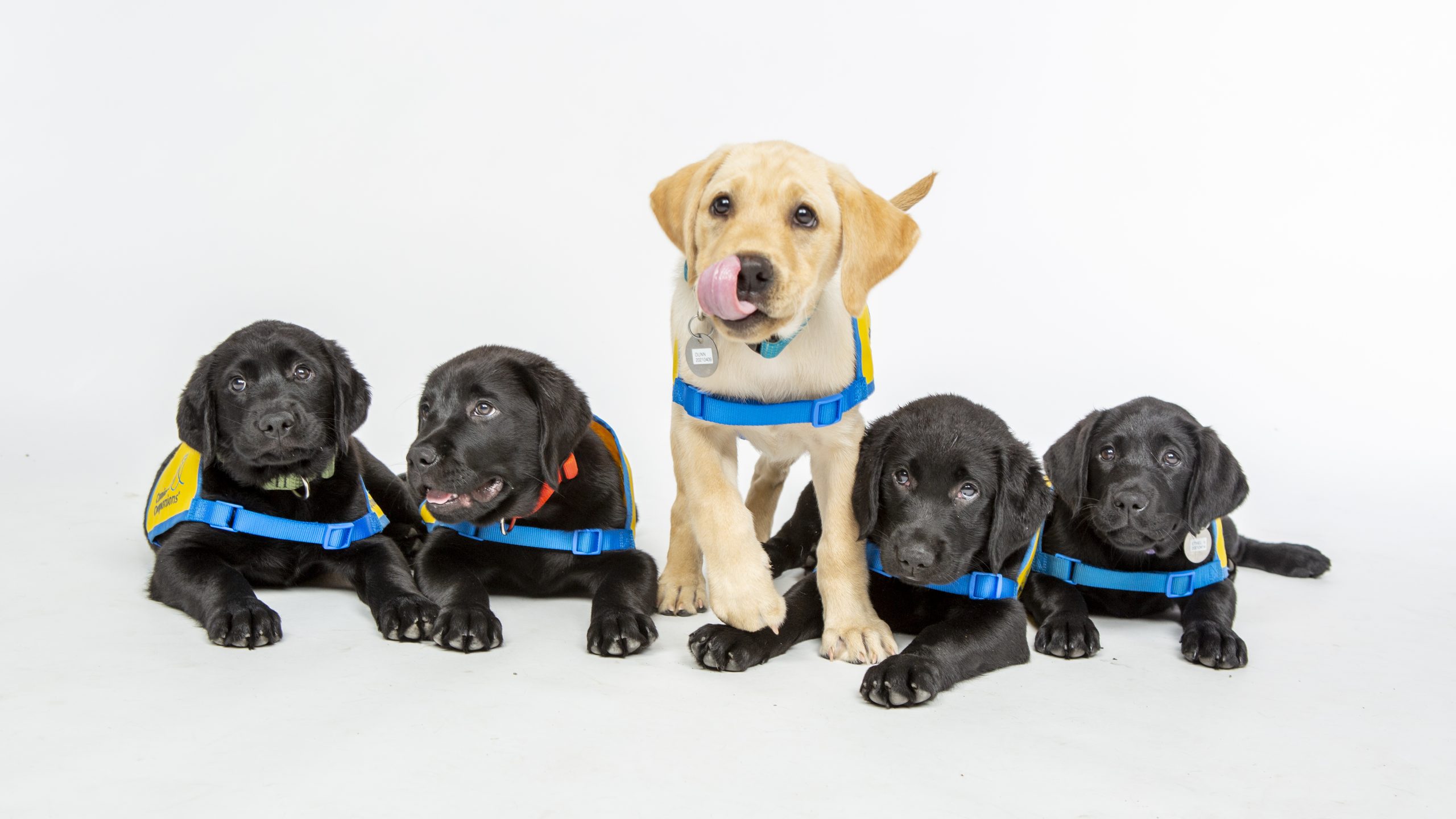 In the eighth second, Dunn jumped up and walked towards the camera, which was actually my favorite photo.
But we posted three of the photos on Instagram and the viewers chose the frame of Gloria nuzzling Fearless, which was Vanessa’s favorite.
I was ecstatic, exclaiming, “We got it! They all gelled.”
It was a fairytale ending you only get to see in movies happen organically during an incredibly unpredictable event. 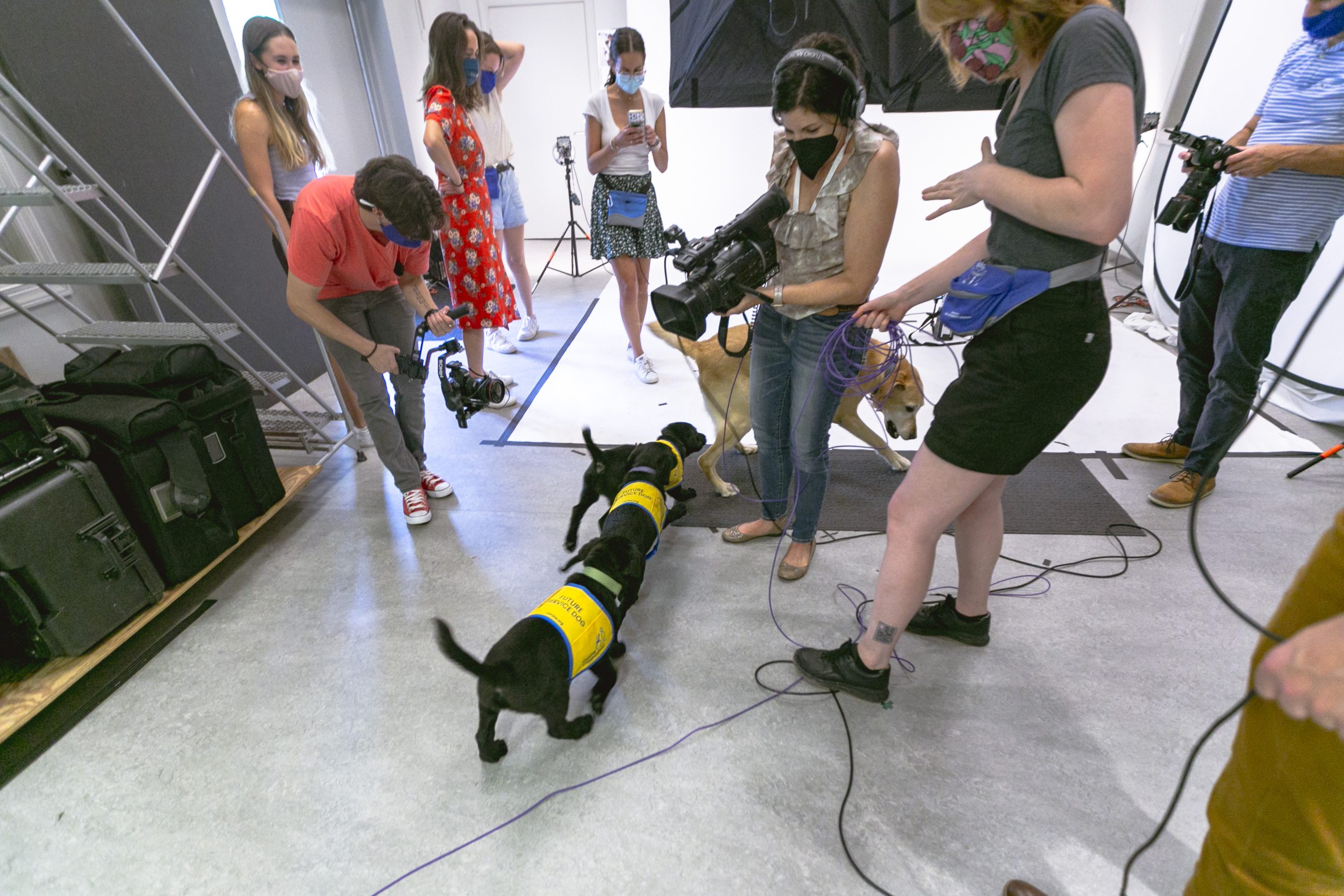 The puppies excitedly run around the studio after the class photo as intern Jacob Whatley, Julie Schoonmaker, assistant director of multimedia and production, and Emily Frachtling, digital multimedia producer, capture video of the action.

People have asked if it’s difficult doing a group photo of five puppies. The last few classes were seven puppies and those were a little more challenging, but no, it just requires patience like a lot of aspects of photojournalism. I’ll often frame up a a pretty view on campus and wait, sometimes 30-45 minutes for the right mix of students to walk through the scene, filling out the composition. And as I mentioned during the livestream, I’ve done literally hundreds of group photos of doctors for various departments and divisions in the School of Medicine, and the doctors were slightly less fidgety than the puppies. 🙂 After five frames, they would be looking at their watches and saying they needed to get to surgery. 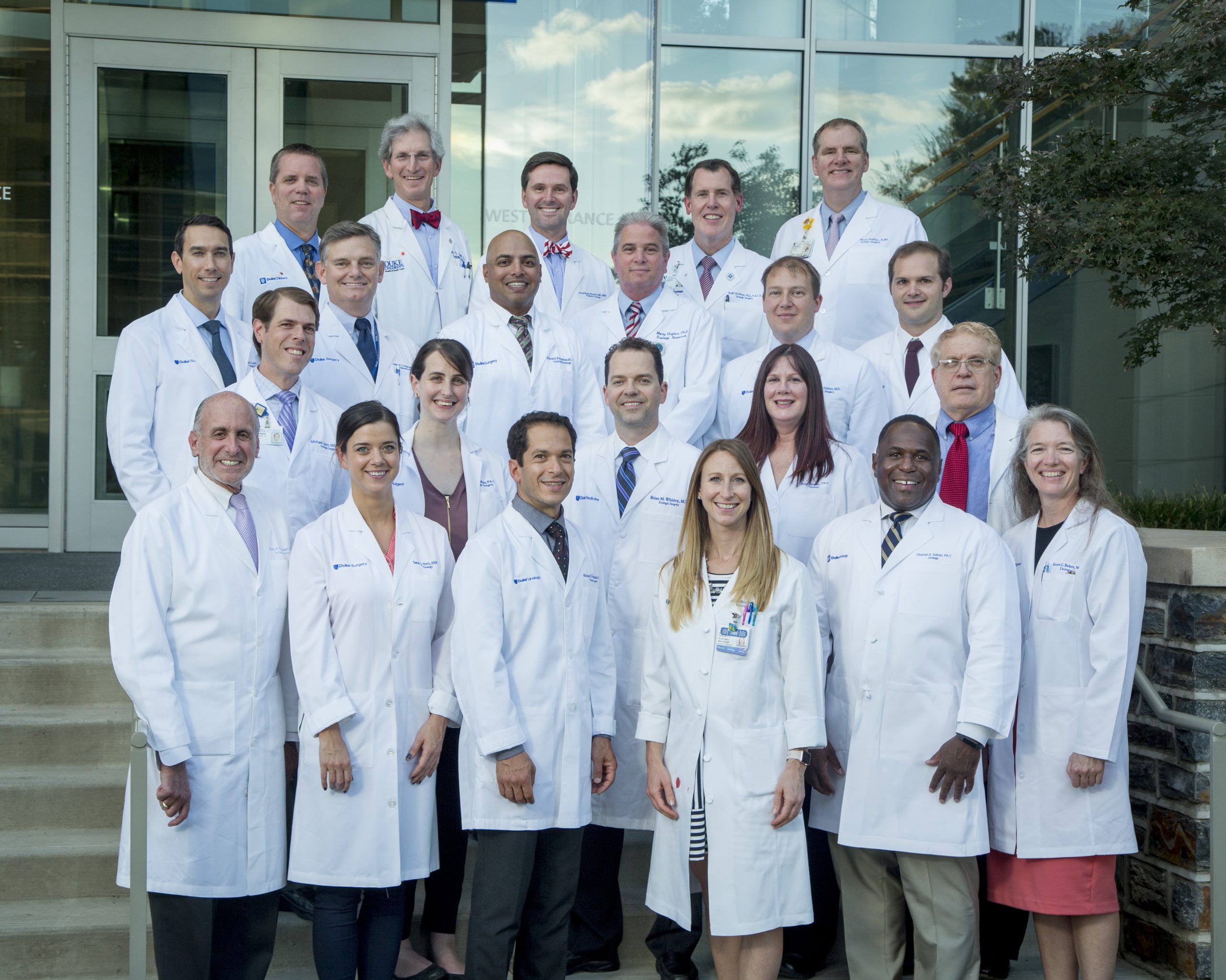 Urology provider team photo on Trent Semans Center steps: one of the several hundred group pictures I’ve done in my Duke career for the Department of Medicine or School of Medicine.

So check out our Puppy Kindergarten Fall 2021 Class Photo Livestream on Duke University’s Facebook Page, you’ll be glad you did. It’s already racked up 240,485 views across Duke’s social media platforms with 17,731 engagements or the times it was liked, commented on or shared.

But this was just the beginning of photographing puppies this semester for me. I‘ve been trying to do an in-depth story on the Duke Canine Cognition Center’s Duke Puppy Kindergarten for two years and was a month into the project in March 2020 when the pandemic derailed my efforts. I photographed and filmed the puppies undergoing cognition testing, consuming endless supplies of treats while training to walk on leashes, helping nurses decompress in the hospital, riding the East Campus bus with a student volunteer to her dorm. My colleague, science producer Veronique Koch, produced a wonderful “Why Do You Study That” on the puppies, featuring Vanessa and her husband, Brian Hare, PhD, professor of evolutionary anthropology. Of course, any amount of time spent with the puppies never felt like work for me, so I’m truly grateful to Vanessa, Brian and the Puppy K team for their cooperation with me and my team, as well as all my teammates, Blyth, Julie, Megan, Emily, Ashley, Jacob, and Greg, who helped make the livestream happen. Looking forward to the Spring 2022 Puppy Class photo already! 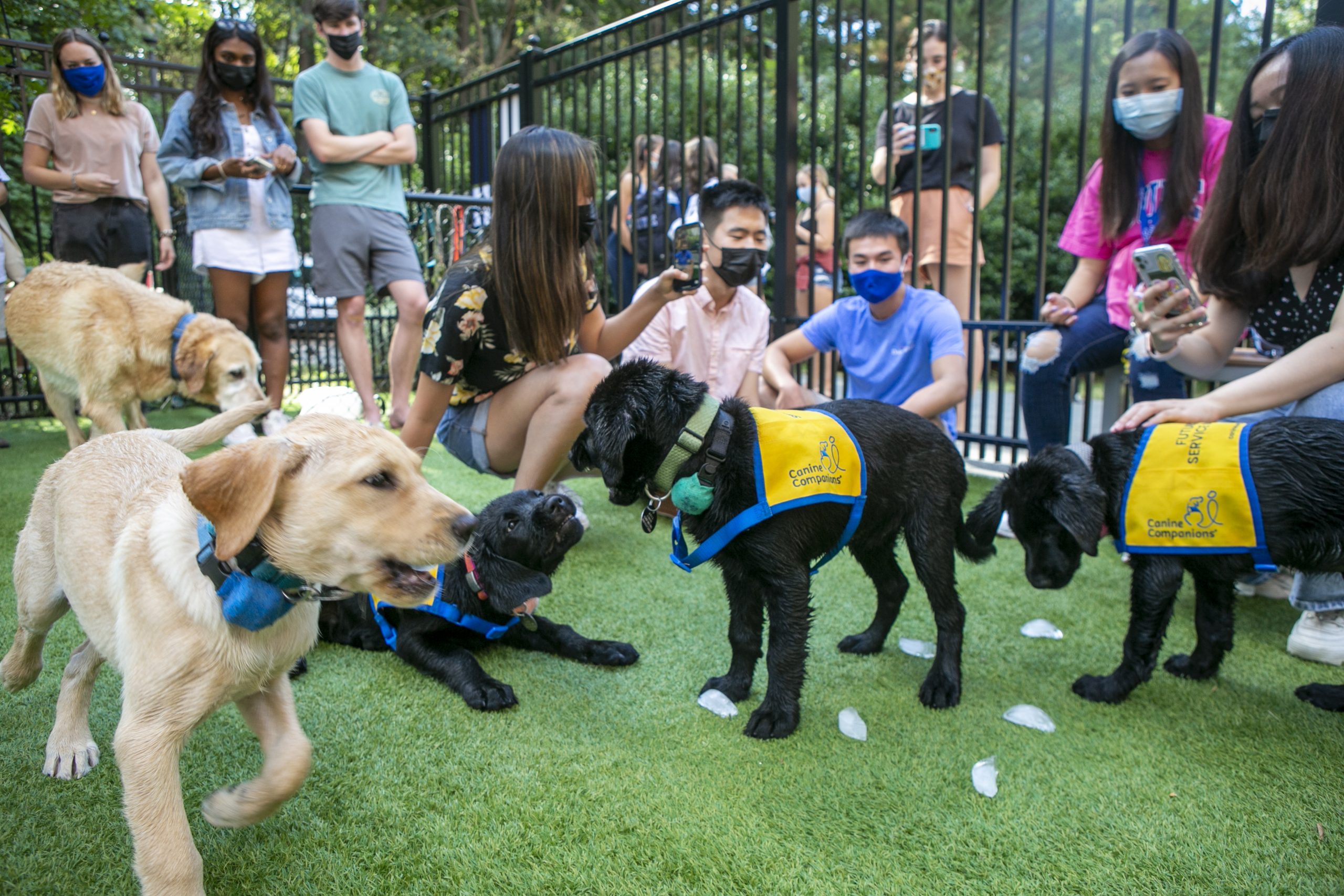 The puppies play with ice cubes as Duke students enjoy their company during an afternoon visiting hour at DPK.

For a deeper dive into the research behind the Duke Puppy Kindergarten program, please check out our semester-long project: https://stories.duke.edu/puppy-kindergarten

And the Emmy Goes to…