A picture is worth: Baldwin’s Supermoon

On January 31st, 2018 we experienced a “Blue Moon” – the second of two full moons in one calendar month – that was also at a super-close apogee making it appear really large (supermoon), which also happened to be passing through the Earth’s umbra at Moonrise giving it a ruddy glow (bloodmoon). This “Super-Blue-Blood Moon” event was too good to pass up, but what to do with it? I had a couple of photos in mind, one of which entailed capturing this “Super-Blue-Blood Moon” over Duke somehow. But how?

I eventually made two photos that day – one of the Moonset early in the morning out at the Outer Banks, and another that evening of the subsequent Moonrise over Duke. Here’s how I did it.

Using an app called PhotoPills (https://www.photopills.com), I was able to determine just where and when each moonrise and moonset would be relative to locations I wanted to photograph with it in. The moon, like the sun, rises in the east and sets in the west, but unlike the sun, the moon can rise and set at various times of the day through the seasons. On this day, the “Super-Blue-Blood Moon” would set early that morning, and rise again that evening. This gave me two chances to photograph it against the horizon, which is where I’d need it for the images I had planned. The idea? To get a familiar object small enough to fit near or inside the moon itself, like this example from Photopills: 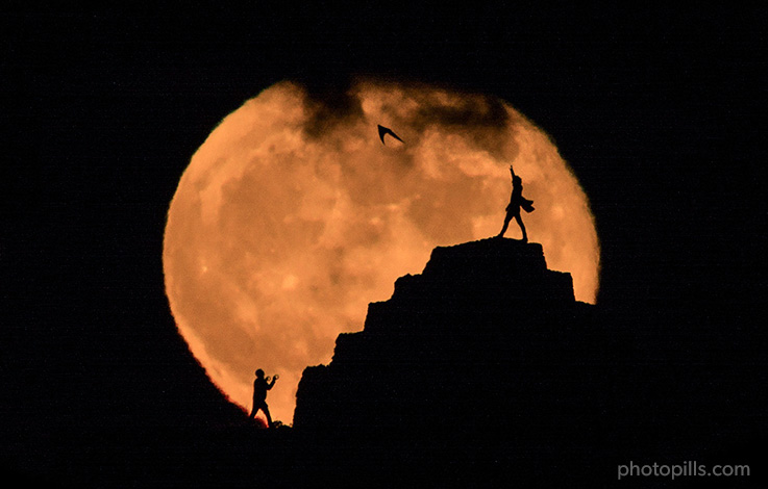 This isn’t a post-production or photoshop trick. It’s merely one of perspective. Since the moon is approximately 225,000 miles away, you can’t really effectively change your distance from it in any meaningful way visually. But, you can effectively and easily change your distance from earth-bound objects. And objects far away tend to appear smaller to us versus objects that are closer. So, if the moon stays effectively the same size no matter what, but you get far enough away from something to make it appear smaller, say a mile or two, and place it against the moonscape, then the moon effectively appears very, very large. That’s the basic technique.

I initially wanted to get Duke Chapel in or against the moon somehow, but the Chapel actually sits in a depression lower than its surrounding area and I was unable to find a location East of (for moonset) or West of (for moonrise) the Chapel that would let me photograph it against the horizon. But, I discovered in my experimentation, that from the perspective of the Chapel Tower, the “Super-Blue-Blood Moon” would be rising very near to Baldwin Auditorium on east Campus. But Baldwin is much bigger than a person, so to have it “fit” inside the circumference of the moon would necessitate me being many miles away. As it is, Baldwin is only about 2 miles from the Chapel as the crow flies, so this would just have to be a “be there and see how it goes” kinda thing.

With the height, angle and time set for my attempt to capture moonrise over Baldwin, I worked on my calculations for moonset due earlier that morning. North Carolina is thankfully still a state with very many trees. While this is great from a conservation perspective, its less so if you’re trying to get a clear shot of the moon AND an object together on the horizon from very far away. You either have to get very high (chapel tower) or look for a very wide open area. One of the largest areas with an open westerly view that I could think of was our very own Outer Banks, so a friend and I headed out to Jockey’s Ridge the night before to scout and setup my second idea, which ended up being the first photo that day as the Super-Blue-Blood Moon set just before sunrise. Since we were in the vicinity of Kitty Hawk, I wanted to capture her flying a kite against the supermoon. But it was barely in the teens out on the dunes, so we’re both quite bundled up, so the scene is a bit of a non-sequitur (women all bundled up, flying a kite against a full-moon? What’s that about?), but it was a fun and challenging experiment, and that’s half the point. I was about a half-mile away from her position – here’s the photo we captured: 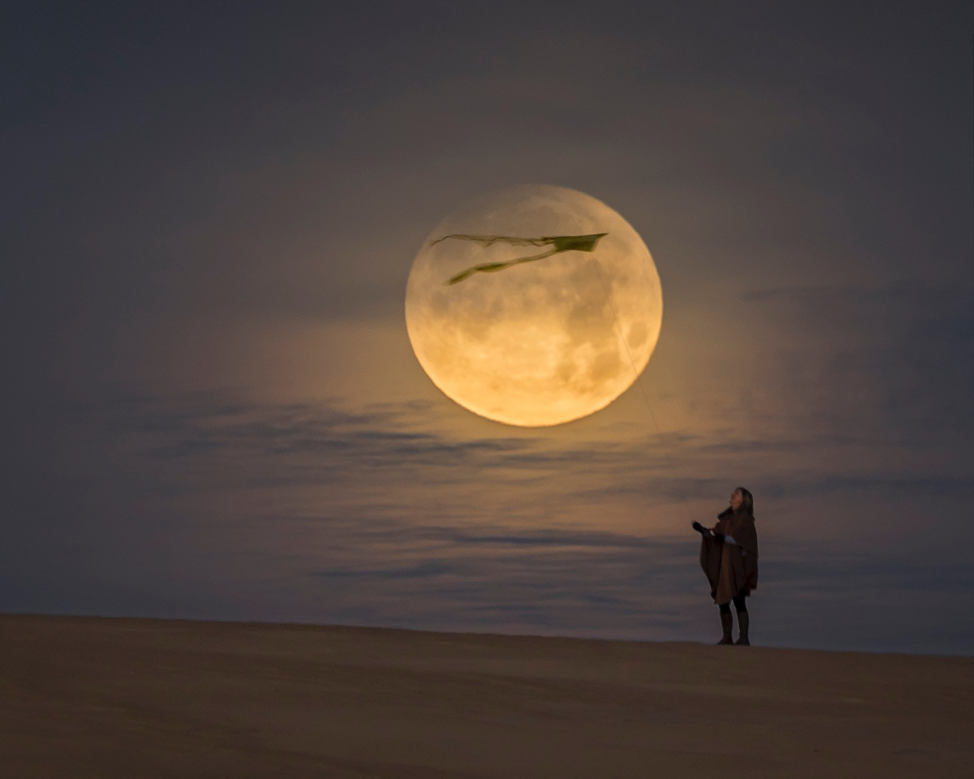 After we warmed up over a nice OBX breakfast, I headed back onto campus in time for the evening photo of the same super-moon rising over East campus after sunset almost 12 hours later. Joni Harris, program Director at the Chapel, was nice enough to arrange access for us as she joined me on the climb up the 10,000 239 steps up to the Chapel Tower. Toting my camera, tripod, and longest lens up those stairs, I’m glad I use Micro-four thirds gear, as its size and weight is a fraction of full-frame gear. After setting up and framing Baldwin in my sights, it wasn’t long before the moon made its appearance and I got my photo: 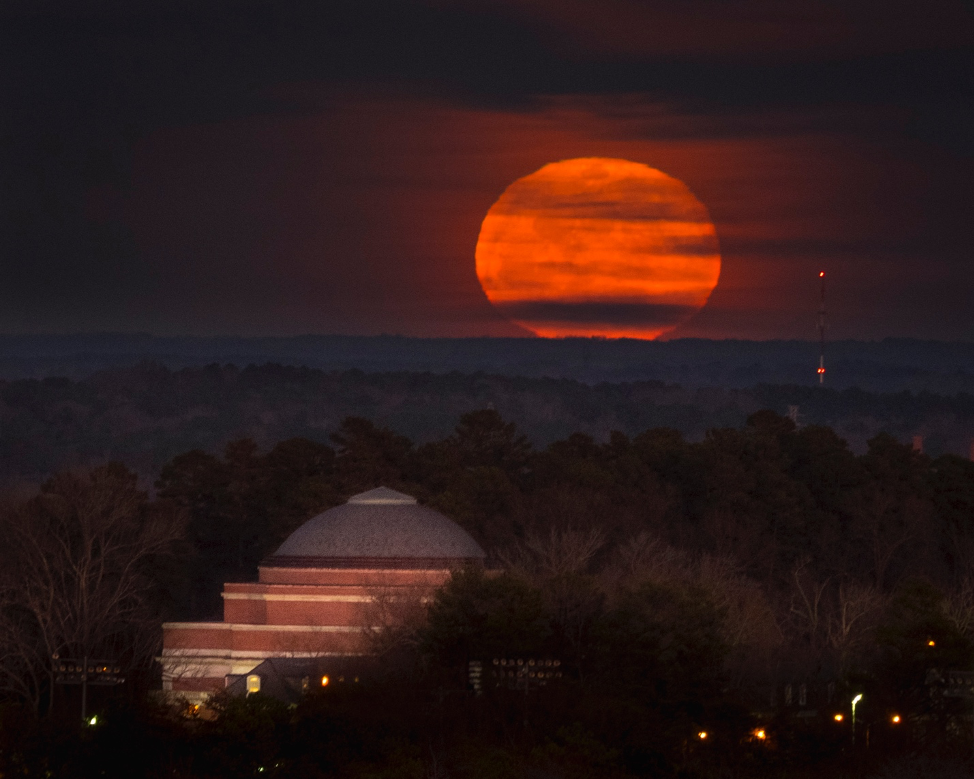 Neither photo is perfect: atmospheric haze and too-slow shutter speeds prevent them from being as tack sharp as I would have liked. To do them over again, I would use a higher iso and faster shutter speeds. There are also now even longer focal length lenses available for my system, so I’d likely rent one of those for even better magnification. Still, for a first time experiment, I’m happy with these for what they are. And, post-production/photoshop work is minimal other than cropping, and I did remove one distracting twig in the sand of the OBX photo.

I hope this gives you a sense of what can go into the making of a photo, and that it might inspire you to get out and make some of your own.

A picture’s worth: Duke’s South Clinic and North Hospital