A picture’s worth: Duke’s South Clinic and North Hospital

Last spring, I set out to capture the “busy-ness” of activity around some of Duke’s Health facilities. I was also looking for a way to connect the health system with the University, and so I was looking for viewpoints that would show some of both Medical and University campuses.

My goal was to tell a story of University/Medical connections, locate the photos as being of Duke, hint at the role of technology and expansion of capabilities, and portray the hive of human activity and care the Medical campus can be. All in one photo.

In scouting locations and times of day for this project, I considered a daytime timelapse portraying the human foot traffic in and out of Duke North and South Clinic. But I did not think daytime lighting would be dynamic enough for what I wanted to portray. No, this would be a nighttime photo, but from where?

I’ve always been intrigued with the aerial perspective, as it unmoors us from the usual convention of seeing things from head-height, but a drone flight after civil-twilight was out of the question at this time. Luckily, both South Clinic and Duke North Hospital have parking decks located nearby.

To show an idea of activity and busyness, I decided I would need a long exposure – to capture accumulating light trails of vehicle traffic. This would necessitate the use of a tripod, a remote release (however softly, the action of manually pressing a shutter release will introduce enough vibration to prevent the photo from being as sharp as it could be), and a lot of patience waiting for the right conditions as the temperatures dipped after sunset. 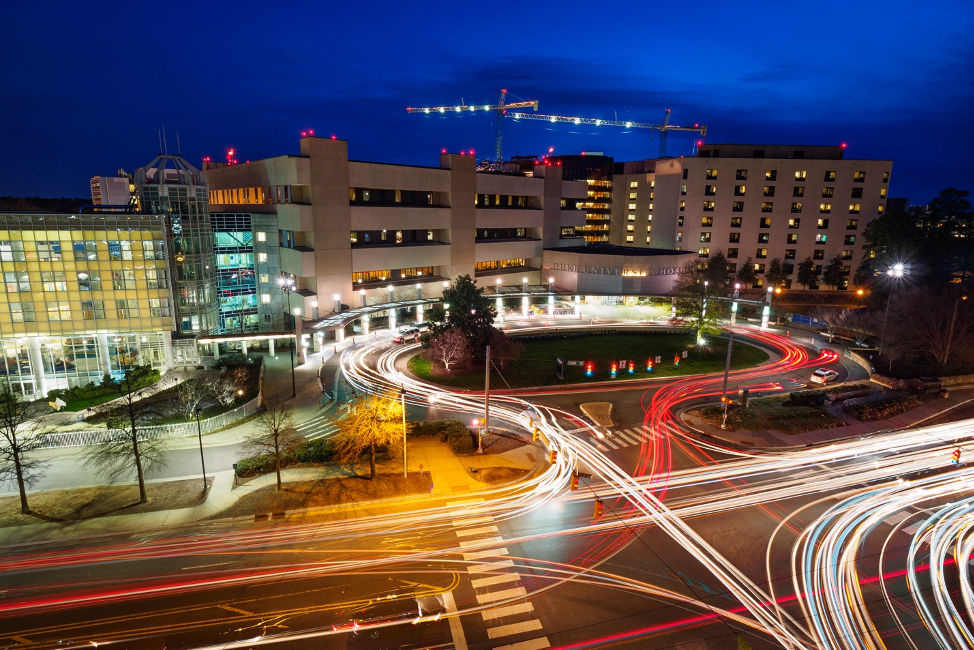 For this photo of Duke North Hospital, I chose a vantage point atop the Duke Hospital parking garage across Erwin Rd from the Hospital (always alert the proper authorities when you’re going to be skulking around on rooftops with tripods – just sayin’). I had to choose a moment when the fading light of the twilight sky would allow the lights from the hospital and traffic to show up distinctly, yet still show an illuminated sky not in complete blackness (while a black sky can be dramatic, in the city it is rarely so, and usually lit up by the green-orange glow of sodium vapor lamps and not what I was wanting here). What I was after was a blue sky, to contrast against the warmer colors of incandescent lighting I was hoping to capture.

To keep the fading twilight of the sky, and yet capture the light trails of many vehicles going by, I would need a very long exposure – many minutes, not just seconds, long. The problem with very long exposures in digital photography is that the sensors get very warm and generate a lot of “noise”, sometimes to the point of rendering the image unusable. Fortunately, the camera system I use allows for a feature they call “Live Composite”, which allows for combining many short exposures (say, just 0.5, 1, or 2 seconds long) into one long minutes or hours long exposure. Without getting into too much nitty gritty details, this blend of optical and computational photography can provide the ISO and noise results from a much shorter exposure, but “stacks” or “adds” these together over a much longer exposure time. In the case of the Duke North photo, my initial exposure was half a second for the main exposure, but accumulated any new objects (such as new approaching vehicles) onto the base image over a 6 minute time span, producing the results of a 6-minute long exposure but with the noise and exposure of a half-second exposure. As both darkness and temperatures began to fall, I headed over to the Duke Medicine Circle garage for a go at the South Clinic: 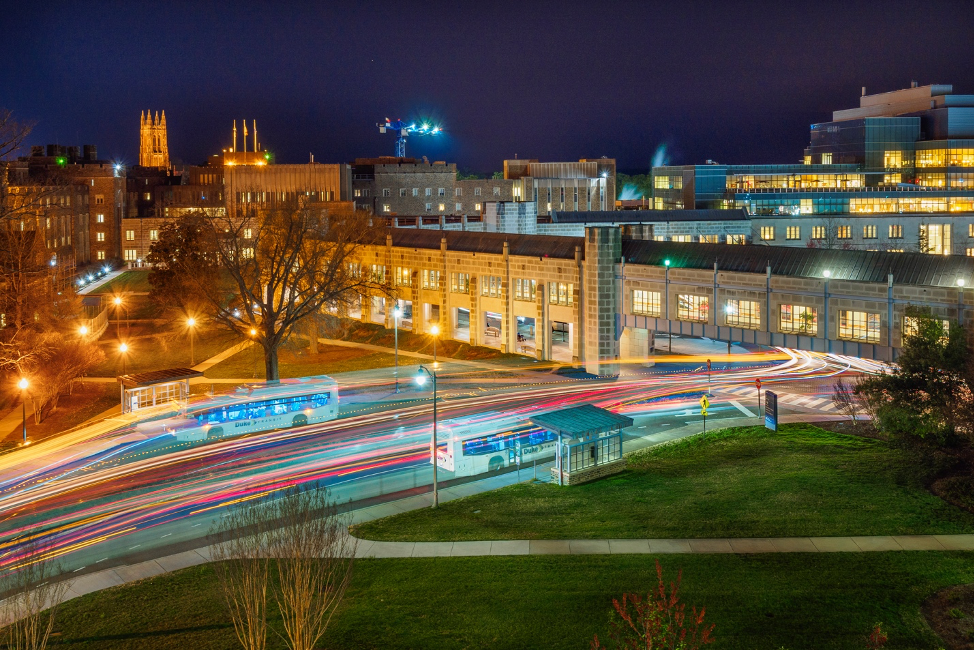 While not as dramatic as the North Hospital results, I was eventually able to find a viewpoint to show parts of the clinic, the main walkway, some construction cranes and of course, our iconic Duke Chapel in the distance. I became intrigued by the bus stop activity, and set out to try to capture that in some way.

After some captures of single busses at each stop, I changed settings to allow for an even longer overall exposure (8 minutes I think), and managed to capture a bus at each stop, which I thought was a much more satisfactory photo. As it is, it’s the same bus – stopping just long enough at each stop to register in the exposure. I really liked this two-bus composition better than any of the other shots I made from this location, but there were only a few other cars that had driven through the frame and I just didn’t have as many light trails as I wanted. And I could see from my rooftop vantage point, that there wasn’t much more traffic coming soon. So, I hopped into my car, hurried down the garage ramps and drove back and forth several times to add my own light trails. As it happened, several other vehicles did drive by about the same time, giving me the diversity I needed to pull it all together. I’m not really happy about the dead space near the lower third of the photo, but c’est la vie.

The nice thing though, essential really, in creating long-exposure work like this is the ability for digital cameras to show you the photo as it “develops” on the back of the camera. In the old days, it would be an educated guess as to what results you’d get (or not get). In this case, I could “see” that I had the busses where I wanted, but not enough light trails, so I could paint the light as I went along in real time. In another example, I was at first using a much “wider” aperture to benefit the exposure. But the artificial lights just didn’t “pop”, so I stopped down to a smaller aperture, which often has the effect of creating the little “star-bursts” that you can see around the specular highlights, which I could preview in real time, choosing the aperture that gave me the desired results.

By the way, both of these photos are, as they say, “Out of Camera”. No elements were added or removed in post-production.

I hope this gives you a sense of what can go into the making of a photo, and that it might inspire you to get out at night and make some of your own.

A picture is worth: Baldwin’s Supermoon